Tomorrow is the thirty-third International Day of Peace. What’s that? you might ask, and why have I never heard of it before?

Well, it’s a twenty-four hour period during which the United Nations invites everyone to honor a cessation of hostilities. It doesn’t get a lot of press, at least not here in Texas, and it doesn’t always work out so well on the battlefields of the world either, as you might guess. Yet it is a noble thought.

Today it’s got me thinking of the role many women play as peacemakers. We are encouraged, possibly by nature, certainly by society, to communicate, soothe and nurture more than our brethren. So while the world does have females quite adept with the sword, so to speak, and a good number of just plain bitchy women not all that adept at anything, we women do turn out to play a frequent role in the fight for justice and empathy on the world stage.

Meet some of my favorite women warriors for a better world, and consider checking out the stories behind them.

Sister Simone Campbell organized a “Nuns on the Bus” tour to challenge extreme budget cuts that threatened the well-being of the very poor, whom she believes her religion calls on her to care for. In the process she ending up earning the ire of the former pope and much of the catholic patriarchy, and got to appear on The Colbert Report. Her book is “A Nun on the Bus” 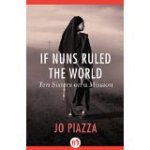 If you enjoy reading about feisty nuns fighting for justice, also check out “If Nuns Ruled the World.” where you will not only learn more about Siister Simone, but will also meet Sister Megan Rice, who is fighting to eliminate nuclear weapons; and Sister Jeannine Gramick, who is leading the charge for the acceptance of gays and lesbians in the Catholic Church.

I first learned of Somaly Mam from my daughter, who was taking a social work class concerning human trafficking. Somaly is a Cambodian survivor of sexual slavery who has grown into an activist fighting the corruption and injustice that allows the lives of so many young girls to be destroyed. Her book is The Road of Lost Innocence and it is well worth reading. As an aside, both this book and my daughter’s class played heavily in the development of the story line for c3, and I count all the many survivors as heroes in their own right, along with the social workers, police officers, and counselors who work compassionately with them.

I’ve recently become a fan of Shannon Galpin, a cross-country cyclist and adventurer who has founded a group called Mountain2Mountain to work for peace and rights for women Afghanistan, the country named the absolute worst place to be a female. Sharon tries to get women out on bicycles as a symbol of their basic rights. Her book is called Mountain to Mountain and I look forward to reading it soon.

I became aware of Shannon and her book through Cathryn Wellner’s website “This Gives Me Hope“. I’ve mentioned Wellner before on my blogs because I find that her daily posts almost always inspire me. She also joins the list of my favorite women warriors as she fights to shine a spotlight on what is inspirational in this world.

One of my favorite fighters of all is a Pakistani girl known the world over as Malala.In 2011, she received Pakistan’s first National Youth Peace Prize and she was subsequently attacked by a gunman for her efforts to support education for girls. I believe in her cause so strongly that ten percent of my proceeds from c3 are being donated to the Malala Fund at malalafund.org. This is an organization dedicated to providing a formal education for the more than 600 million adolescent girls in the developing world who struggle for this basic right. I can think of nothing more likely to make a peaceful world than to have 600 million open minded and educated young women available to help lead the next generation.

Finally, I owe a thank you to Sheryl Wudunn and Nicholas Kristof , wife and husband authors of Half the Sky. Their inspirational book first introduced me to Malala’s full story, along with tales of many other women and men fighting to bring peace to this world. These tales also inspired me to take the c3 story line down the unconventional path I choose, as I tried in my own small way to shine light into corners that have remained dark for far to long.

What is world peace about? Yes, of course it is about people not shooting at each other, or bombing each other either. But if we’ve proved nothing else with modern society, we have demonstrated how horribly difficult that is to accomplish.

I’d like to celebrate World Peace Day by suggesting that this is really about there being enough justice and fairness and freedom in the world. If we fight for those things, instead of fighting for more land, or more control over others behavior, then perhaps over time we will finally loose the desire to hurl objects at each other. Wouldn’t that be nice.