A bit of history to remind us of how far we have come. 96 years later, the animosity directed at this fight for the right to vote is hard to believe. How many of today’s issues will seem equally absurd 96 years from now? 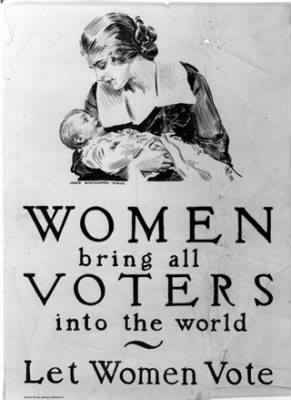 Today in 1916 the 19th amendment finally gave women in the United States the right to vote. New Zealand was the first country to do so, in 1893, and Saudi Arabia holds the dubious honor of being the most recent, in 2011. Change takes time.

The United States hardly lead the parade for voting rights for women. Women in countries ranging from Denmark to Uruguay to Armenia were able to cast their votes first. 1947 was the biggest year for women’s suffrage, with eleven new countries deciding it was time to join what was once considered a radical movement.

Please drop by the Facebook page “Herstory” and give them a like for the poster above and checkout the full timeline of women’s voting rights the world over on Wikipedia. It will surprise you.

One thought on ““Give Mother the Vote””