This is a post about Aretha Franklin and wearing a hijab and my mother’s funeral, and it comes to you from a cafe in Marrakesh Morocco. 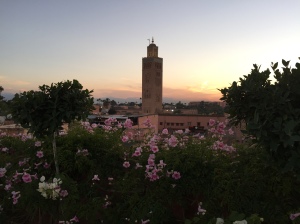 I’m staring out the window at the crowds of tourists and locals crossing a busy street in front of the Koutoubia Mosque as I write. I’m alone in this city, far out of my comfort zone, and I’ve just ordered my first couscous. I settle into the ornate red pillows, ready for a genuine Moroccan experience, when I recognize the unmistakable voice of Aretha Franklin in the background.

Now I like Aretha as much as anyone and maybe more than most, but she is kind of getting in my way here, and it’s not even one of her better songs. I listen more closely and I feel the ghost of my mother snuggle into the pillows beside me.

What is my mom doing here? She died a few years ago and, in spite of her having been a difficult woman in many ways, I admired her a great deal. She was passionate, smart and so headstrong that when my sister and I were looking for music to play at her funeral my sister jokingly suggested the song “My Way.”

Mom’s death was sad, of course, but also bittersweet. Her body was tired and her mind was worn, and her independent spirit was struggling to maintain its identity as the rest of her began to fail. Because the Frank Sinatra classic was a favorite of her generation, I went ahead and searched out the words. To my surprise they weren’t silly; they were rather touching and perfect for my mother. (And apparently not only for my mother. Inquisitr reports that My Way is the number one song used at funerals in Great Britain. Who knew?) We used the song and yes, my sister and I both cried profusely as it was played. I realize that’s the song Aretha is now singing.

One of the things that I most admired about my mother was her strong sense of justice. A white woman from a farm in Kansas, she somehow found her way to a strong belief  in the dignity and equality of all humans and she spent her adult life arguing for the rights of every non-privileged group she encountered. Except for one. 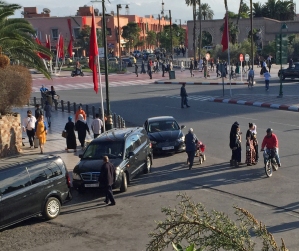 My mother was mostly unaware of Muslims until late in her life, when the events of 9-11 and the subsequent wars put this unexplored culture front and center in the worst of ways. Her feminist side responded first, and her anger at the much touted restrictions on Islamic women flared at about the same time that her ability for nuanced analysis was fading. She came to hate the hijab and all other forms of religious covering worn by Muslim women, refusing to see the head coverings as anything but a sign of male dominance.

I work in the oil industry, and I know many Muslims who I admire and enjoy. I tried to explain to her that head coverings were worn for many reasons that often included a woman’s own choice. That choice might be influenced by her desire to please her family, her society, or her God, or it might center around her own feelings of comfort or safety. My mother would not listen.

So now I am looking out the window, watching the world walk by, and her spirit is staring out the window with me. Half of the humans we see are female, and a few are covered from head foot, only showing eyes. “I still think that’s horrible,” she mutters to me. 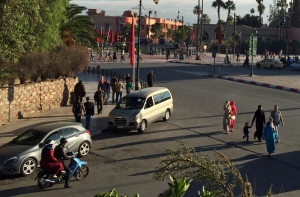 Some wear all manner of scarves, including some of the tourists. Others let their hair fly in the breeze; long tresses and short bobs, the blonde, the black and the grey of the women of dozens of nations and all ages. They move happily, most of them talking and laughing no matter how their head looks, sometimes jumping out of the way of the many women and men riding motorbikes and bicycles down the crowded street. I turn to my mother’s ghost and she nods.

Aretha Franklin is well into her rendition of the song “My Way” now, and I decide that the overall effect is not bad, even though I wish she would have changed the lyrics to say “what is a woman?” instead of “what is a man?” Nonetheless, I think that mom likes the song, and that she is beginning to appreciate the scene outside the window. All those women out there, each one doing things her way, even if not everyone in the world understands it.

I sip on the mint tea that is everywhere, and my waiter brings the vegetarian couscous cooked in the wonderful clay pot called a tagine. It is as delicious as anything I’ve ever eaten. I consider how I am a feminist, too, and I share my mother’s belief that no one should force a woman, or a man, to wear garments that restrict her (or his) freedom to move, see, talk, eat or enjoy life. But part of that belief is that every woman should get to live her life her way.

Mom is fading back into the velvet pillows now as I concentrate on my lunch, but I like to think that she and I reached some sort of understanding. Freedom to make personal choices matters. That freedom meant the world to my mom; it means a lot to me. And it is what Aretha has been singing about all along.

(Enjoy this video of Aretha Franklin singing “My Way” and check out the lyrics below. For more about my trip to Morocco go to I see ghosts, That’s Why you Make the Trip, It’s an angry world in some places, and Happy International Day of Peace, Lahcen and Najet.)

And now, the end is near and so I face the final curtain
My friend, I’ll say it clear, I’ll state my case, of which I’m certain

I’ve lived a life that’s full, I’ve traveled each and every highway
But more, much more than this, I did it my way

Regrets, I’ve had a few, but then again, too few to mention
I did what I had to do and saw it through without exemption

I planned each charted course each careful step along the byway
And more, much more than this I did it my way

Yes, there were times, I’m sure you knew when I bit off more than I could chew
But through it all, when there was doubt I ate it up and spit it out
I faced it all and I stood tall and did it my way

I’ve loved, I’ve laughed and cried, I’ve had my fill my share of losing
And now, as tears subside I find it all so amusing

For what is a man, what has he got, if not himself, then he has naught
To say the things he truly feels and not the words of one who kneels
The record shows I took the blows and did it my way.