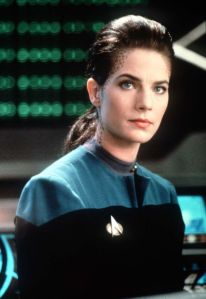 I’ve been a feminist since I was a teenager; longer than that if you consider wanting to be the chief science officer on the star ship Enterprise as a sign of early feminism. And yet, like other like-minded authors of speculative fiction, I struggle with feminism in my writing.

My first problem is that I define feminism as the radical notion that women are people. This means that some of them (women, or people if you prefer) are foolish. Some are selfish or incompetent, and a few of them are downright mean. All of them have flaws. I believe that to make every female character, or even most of them, models of virtue is to not treat my female characters as people, but rather as carriers pigeons for an ideology.

I recently stumbled on an online group discussion about a book I read years ago. Dreamsnake (a multiple award-winning 1978 science fiction novel written by Vonda McIntyre) defied the stereotypes of the genre way back then by putting a gutsy lady hero in the middle of a broken world. I wanted to like this book so much. But I didn’t, at least not all that much. 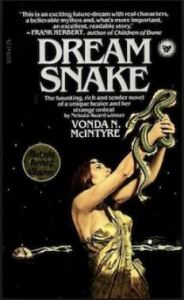 The main character Snake seemed two dimensional to me. She was everything a feminist hero should be, which was great, and she was never anything else, which kind of bored me. The rest of the women in her post-apocalyptic world were equally unwavering in their strength and capability. There may have been exceptions (it has been many years since I read the book) but my lingering impression was of a cast of characters carefully crafted to make a point. Interesting, but not engaging.

So, my female characters are all over the place. Most of my protagonists are strong women, but my novel y1 features a gay male shape shifter, and his friends.

I remember being so excited when a blog called The Future Fire agreed to review the book, and being so disappointed when the reviewer remarked “I do have to say, I am not really impressed by the depiction of women here. Of the two main female characters, one is shown to be foolish and unstable (where have we seen those words before?) and the other a child-like creature who runs from one daddy figure to another.”

No, I wanted to scream. That’s just two of the characters. What about capable Chloe? Resilient Raven? They are just as important to the plot. But of course one of the things you have to learn when you write books is not to scream at your reviewers, even in your own head, no matter how much you think they are missing the point. You just try to make your intentions more clear in the next book.

The other problem I have with my own sense of feminism and writing, is that I want my world to feel real to my readers. Sadly, our cultural stereotypes are internalized from childhood whether we like it or not, and they color our sense of what is believable. A writer can easily have one top surgeon at the hospital be female, and I think a good story ought to have a few of them. However, if the writer insists on making well over half of the doctors female (and more than half of the nurses male) then today’s reader will struggle to settle into the plot. This works fine if gender is supposed to play part in the story, or in the world-building. But if it isn’t, then you’ve got a bright light shining where you don’t want one, and you have to choose between making your point and engaging your reader.

A while back I read a fascinating article on a blog called Mythcreants entitled Five Signs your Story is Sexist.  This wonderful and helpful post included such gems as

“Patriarchy conditions us to think of men as normal and women as special exotic creatures. That’s why in many stories, particularly stories written by men, characters are only women if the storyteller thinks they have to be.”

Excellent point. If every female in the story is someones girlfriend, sister, daughter or mother, I think a good storyteller should seek out a few other characters and change their gender. You know, the helpful bartender who notices something that saves the hero can be a girl, and no, your hero does not have to fall in love with her. She can even be an old woman.

Here is another gem.

“Because most of us have a very skewed sense of what ratio of men to women is normal, the only way to ensure equal representation is to actually count them up and tally the total.”

This is an exercise well worth doing. While I think that a writer may not be able to achieve “equal representation” without making gender an issue in a novel meant to be about something else, I bet writers of all genders will be surprised by how far we all lean towards predominantly male stories. Yes, we can lean less that way and still tell a tale that sounds like it is real.

I’m already working on the novel I hope to write after I finish my 46. Ascending series. My protagonist will be a she, of course, and I already know that she will be smart, capable and kind. That part is easy. Now I’m working on what she doesn’t do well, developing the ways in which she is vulnerable. To me, those traits will be what makes her story interesting, and also what makes her fully human.

One thought on “Am I writing sexist science fiction?”