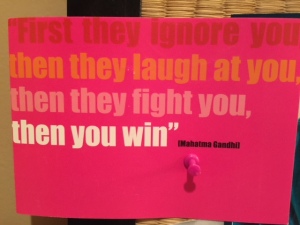 It’s easy to hear commentators describe the “me too” moment and feel cynical. It is tempting to lump it in with the marches for science and climate sense, and the recent amazing push by high school students for gun safety laws, and all the writing and calling so many of us have done for so many causes, and conclude it has all been useless because things aren’t any better. Is it true?

My husband and I have a fondness for procedural crime dramas, and we’ve recently gotten hooked on a series about a Wyoming sheriff from a decade ago. He and his wise Native American friend Henry handle all manner of mayhem, but a recent episode about sexual assault took a turn for the serious when justice was not had. The young female Cheyenne survivor was referred to a group of Native American women who met monthly to help women in her situation.

“How long has this been going on?” Henry is asked. He gives the questioner a funny look.

The writers got that one right.

Yet, what we forget is there has been change, in this area and so many others. Both laws and attitudes about sexual harassment, sexual assault and domestic violence have slowly crept towards reasonable, as have our laws and attitudes in other areas of human fairness. 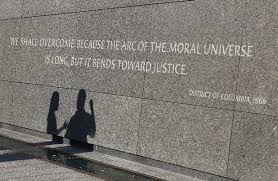 I understand there is debate about Martin Luther King’s quote “The arc of the moral universe is long, but it bends toward justice.”

Some argue these words discourage the hard work needed to make a better world. I see the quote  differently. I think it means that if we do the hard work, if we raise awareness and argue for fairness and believe in justice, then slowly, the inherent goodness in the human soul will respond with a gentle lean towards what is right. I think the quote means that ultimately humans are a moral people who understand and wish for goodness. Given time and encouragement, they will grow in that direction much as a plant grows towards the sun.

No single event ended segregation, no one protest stopped the Vietnam war. But over years, the hatred behind racism and the futility of needless conflicts fell out of favor with mainstream American, and differences were made. Perhaps too little. Certainly too slowly. But it was undeniably better than if there had been no progress at all. 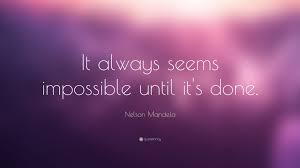 So I try to remain hopeful as I listen to the “me too” hype. Nothing will be particularly different tomorrow. The success of the movement will be apparent a generation from now, when mothers tell their daughters how bad it once was, and the daughters have trouble believing them.