The world of science fiction has changed. When my father introduced me to his favorite books decades ago, there was not a female author to be found. Not long after, I discovered Ursula Le Guin, Kate Wilhelm and Vonda McIntyre on my own. So, women could write this stuff. Well then, that was what I was going to do someday, because I ‘d already been told my first career choice of becoming an astronaut was “not realistic.”

It wasn’t many years at all before women did go into space. As I grew into adulthood, the list of women who wrote speculative fiction grew by at least an order of magnitude. In fact, it has now increased to the point where five of the six 2019 Hugo nominees for best novel were women. Wow.

It should also be noted that Artificial Condition by Martha Wells took best novella this year; If At First You Don’t Succeed, Try, Try Again by Zen Cho won best novelette; A Witch’s Guide to Escape: A Practical Compendium of Portal Fantasies by Alix E. Harrow won best short story and best series went to Becky Chambers’ Wayfarers books. Yes, they are all women.

It’s hard to find a simple explanation for this change. One could guess it is because the world has become more welcoming to women pursuing dreams of all kinds. But that should result in something more like woman being half the nominees, not most of them.

Anyway, today’s world of SFF writers could, in part, reflect the fact that women make up a larger percentage of the writing and the reading community in general.

Another theory is that society is more supportive of women then men who write variations of speculative fiction that shade into romance. This gives women writers (for once) a larger menu of styles and subject matter to chose from. I can see this perhaps accounting for a larger number of female SFF writers over all, but few if any of the female-authored pieces nominated for awards could be considered part of this hybrid romance genre. 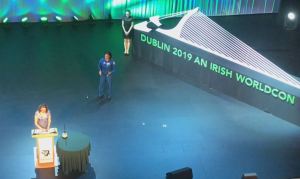 Maybe it’s this simple. Most of the best SFF last year was written by women, and that’s that.

I was happy that my particular favorite, The Calculating Stars, by Mary Robinette Kowal, won best novel. For those of you not familiar with it, it is part of collection of stories (and two novels) set in an alternate world in which women were admitted into the USA’s initial space program. Guess you can see why I’d have a fond spot in my heart for this premise.

I watched Mary Robinette Kowal’s acceptance speech from my perch in the spotlights. (I was a volunteer running the spotlight for the show.) Astronaut Dr Jeanette Epps was on stage with her and it was a one of those weird maybe-all-is-right-with-the-universe-after-all moments. I loved it!

(Read more about my Worldcon adventures at An Irish Worldcon: I’m here!,  at Feeling at home, at A New Irish Experience and at Forward into the Past.)