Today it is my pleasure to welcome author Russell Archey and his fantasy novel, The Seven Spires.

An incredible high fantasy adventure set in a world based on familiar fairy tales, folklore, and mythology, “The Seven Spires” is an epic story of dragons, magic, conquering evil, and discovering magnificent new places.

When a fearsome creature known as Wyvern begins terrorizing Emrallt, one of the seven realms of the continent of Septer, a group of heroes are brought together seemingly by fate to rally against him. A prince, warrior, wizard, and mysterious, sorceress-like sybil try to discover why a common maiden could be the best chance their kingdoms have against Wyvern’s growing forces that threaten to dominate each and every one of the ancient, arcane spires that bind their kingdoms, and world, together.

Every fantasy author has to deal with the dual problems of how much vocabulary to create and how to do it. I was curious about Archy’s approach and he was kind enough to provide this interesting answer.

I didn’t create much vocabulary for the world in The Seven Spires, but I did draw on many sources for naming conventions. Since each kingdom and realm in the book is based on different mythological and fairy tale criteria, I tried to stick with conventions from each respective source.

For example, the Red Kingdom is properly known as Edda. This name comes from the Poetic Edda of Norse mythology. Names like Horodir are meant to invoke such Nordic naming conventions, where others like Vidar are directly related to Norse mythology. One of the most dangerous creatures encountered in the book is the monstrous, worm-like jormungandr who dwell in the Jotun Foothills—both named after creatures from the same mythology. The capital city of Edda? Valgrind, otherwise known as one of the gates of Valhalla!

Some naming conventions are meant to tie characters together, such as the three sorceress sisters who have the ‘æ’ symbol in their names to give them a mystical appeal. Other names and titles were built from various words to create something new. The capital of the Diamond Kingdom, Icostraea, is a combination of “icon” and the Greek goddess of justice and purity, Astraea.

Of course, what fantasy story filled with mythology, fairy tales, and folklore would complete without dragons? I wanted to try something unique with the dragons in this setting. Dragons are rare creatures in Septer (itself named after a word for the number seven and bringing to mind a symbol of authority) and they are named after what I’ve always felt are dragon-type archetypes.

Father Dragon is the progenitor of them all, and as such, each other dragon is referred to as a “dragon-child.” Each dragon-child found a home in a separate realm, making seven total of their kind in the world: Father Dragon, Drake, Naga, Serpent, Wyrm, Hydra, and, of course, Wyvern. Despite their rarity and special, unique natures, not all are still alive at the start of the novel…

As you can see, even though I didn’t create any languages or overly unique vocabulary for the novel, many different languages were used to build the world itself. It’s a great big continent out there!

Russell Archey has been writing since he was old enough to hold a pencil. His love for narratives, world-building, and story-telling has fed into nearly every aspect of his life: from his video and board game hobbies to pressing his most cherished books onto his unfortunate children (who will, one day, read the Lord of the Rings trilogy whether they like it or not). When he’s not creating new worlds and horrifying things to threaten them with destruction, he’s bringing other author’s fantastic works to life as an audiobook narrator, spending time with his two children, and pressing his dear wife’s eternal patience with his quirky habits.

The author will be awarding a $25 Amazon/BN gift card to a randomly drawn winner via rafflecopter during the tour.

She reached for his leg, wanting to observe the wound. She gently cupped the bandaged appendage in her hand and steadied it with the other. The bandages were caked with blood and made for a sorrowful sight. It was only a few moments, however, before she felt a tingling in her hand. It wasn’t painful or uncomfortable—just a light prickling sensation all along where her skin made contact with the Prince’s wound.

She looked on as the color slowly returned to the Prince’s leg and, eventually, his face. His sweating stopped and his breathing returned to normal. What just happened?

The Maiden began to unwrap the bandages and then suddenly stopped for fear of hurting the Prince or exacerbating his wounds. She looked up quickly to see him slumbering peacefully. She continued to unravel the sticky bandages until they fell away.

The Prince’s shin was covered in the blood from his wrappings. It was difficult to see much at first. Then the Maiden saw…nothing. No wound, nor scar, nor scratch. There was nothing beneath the blood, except for a leg that was as whole and healthy as it had ever been. His wounds had been completely and unquestionably healed by her own hands.

Russell Archey — we appreciate your sharing your book The Seven Spires with us! Best of luck with sales, and with all of your future writing.

5 thoughts on “The Seven Spires” 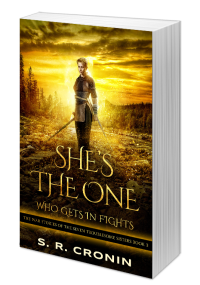