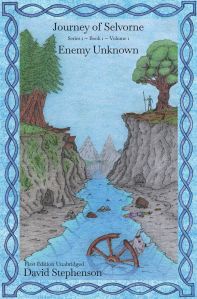 Join me for the last post concerning surprising secondary characters in SPFBO7 novels as author David Stephenson shares his thoughts about character development in his SPFBO7 entry Enemy Unknown. He confesses that if he hadn’t kept at least one secondary character under control, his book would have been “short, boring, and bloody.” Perhaps you have such a secondary character in your book as well?

In your mind real people, and imaginary characters, are represented with the same neural modelling. A real person, through their actions and their words, provides stimulus that makes you rethink – remodel – reprocess all you know of them. What you then think of them, changes that modelling. An imaginary character cannot do that – they are not external – they cannot suddenly do something, or say something unexpected. But you can think about them, in the same way you can reflect on real people, and they can run amok within your mind. Drawing upon all you know of anyone you met, any other character or trait you have already processed. They can become, in your mind, as real as any person you know. Even to the point of being pathological, but more likely just really, really potent.

To allow them to grow so real – this can be one of the greatest joys of writing, the delightful madness of the unexpected. This is a joy an author experiences perhaps far more than a reader might be. A reader is surprised, somewhat, by every character in the story – they do not know what is coming. The writer ~should~ know what is coming, and can be utterly astounded by the sudden, unrestrained lunatic within who takes control of their fingers and bashes the keys to their own desire.

Main characters can do this, a little. Sometimes a lot. A main character arc is usually entwined with the plot and themes of a tale. Restricted, at least a little. Perhaps that makes them rebel, a little.

Side characters, however, might only have one or two restrictions. Their reason for being might be to fulfill some minor need need in the story. A plot device, or prop – their single purpose being their only restriction, and so they can grow, taking inspiration from the story events, the interactions – the deepest emotions of the author. Drawing stimulus from deep in the unconscious, growing as they gain the attention of the author, as they write. Stealing the story, or spinning off to a new series …

Torvor – the minor character who thumped his way into a major role, in later books of my series. Strong. Handsome. Rugged. Skilled. Hilarious. Stealing from my unconscious desires of how I wish to be – how I was, more, when young. Well, as I remember … I digress. His comments are fast and cutting, with a smirk. He is worldly – a hundred times more suited to being in the dangerous situations than the main hero, who is thrust into intrigues he can only barely handle. Were Torvor the hero, perhaps the book would be short, boring and bloody. As it stands, I, as writer, know his place and kept him under control – a mirror to reflect the limits of the true hero. What Torvor does in later books, however … might be up to him.