Today it is my pleasure to welcome author Emily-Jane Hills Orford and her fantasy/science fiction novel, Beauty in the Beast.

Priya, a name that suggests beautiful. Amell, a name that suggests all powerful. One is a beautiful young lady; the other a beast. Their paths have crossed before, only Priya doesn’t remember Amell from her past. Or does she? And what does it all mean? The Amell she meets is part beast. So are the others at Castle Mutasim. Is she one of them, too? How can this be? What manner of creature would experiment on other living creatures, to mutate them into something bizarre and, sometimes, downright dangerous? Priya has to know. She wants to know. And she wants to make things right. 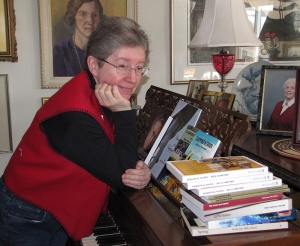 Emily-Jane Hills Orford is a country writer, living just outside the tiny community of North Gower, Ontario, near the nation’s capital. With degrees in art history, music and Canadian studies, the retired music teacher enjoys the quiet nature of her country home and the inspiration of working at her antique Jane Austen-style spinet desk, feeling quite complete as she writes and stares out the large picture window at the birds and the forest. She writes in several genres, including creative nonfiction, memoir, fantasy, and historical fiction. http://emilyjanebooks.ca

Buy Beauty in the Beast

In my books I usually have one minor character who insists on playing a larger role in the story. I’m always curious as to whether other authors experience this, so I asked Emily-Jane Hills Orford if she had such a character in her novel, Beauty in the Beast? And if she didn’t, I wanted to know how she got the characters in her head to behave so well! She answered both questions and it appears she and I have similar problems. Enjoy her delightful response!

Priya’s best friend (BFF, of course) was her rescued dog, Bear. Only, upon arriving at Castle Mutasim, she discovers that Bear is really a mutant dog/human and who knows what else. Sitting next to her at the grand table in the castle’s dining room, Priya is stunned.

““Yes, Priya,” the creature replied. “It is I. The one you call Bear. Perhaps you could come up with another name. Like Gawain. Or Wayne, for short.”

“His suggestion was met with guffaws all around the table. “He fashions himself after the great Sir Gawain,” Roderick paused from his eating long enough to explain, pointing a fork at Bear. “Knight in shining armor. Rescuer of damsels in distress and all that.””

From BFF as a dog, to BFF as a mutant, Bear, now Wayne, aspires to capture Priya’s attention, only he has a hidden agenda which is not in Priya’s best interests or that of the other castle’s occupants. He always appears to be elbowing his way into the action. I really can’t say anymore without giving away the story.

As for your second question, how I get the characters in my head to behave so well, I didn’t think they did. They haunt me in my sleep and plague my every waking hour. I’m forever fixing them up and molding their moods to suit the plot. No, they don’t behave: it’s a smoke screen, an illusion.

Emily-Jane Hills Orford will be awarding a $10 Amazon/BN gift card to a randomly drawn winner via rafflecopter during the tour. 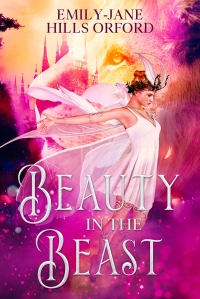 She was pinned in a hunk of metal, the world around her growing darker by the minute. And it was cold. Bitter. Bone-chilling. A soft tongue licked her cheek. Whines and a warm breath slipped into her ear. Bear. Her three-year-old mutt, a Border Collie-Black Lab mix. Black and white. Full of love and mischief. Her strength in a time of need. Like right now.

She had rescued Bear. A puppy tossed in a dumpster. Left to die. The two were inseparable. Now, she was failing Bear. And they would die.

As she slipped into oblivion, she felt a fog of confusion slither through her brain. Who is Amell?

Emily-Jane Hills Orford — we appreciate your sharing your book Beauty in the Beast with us! Best of luck with sales, and with all of your future writing.

2 thoughts on “Beauty in the Beast”