“He asked me out again. I don’t really want to go. But maybe I should. What do you think?”

It’s a common conversation among women.

She deals with the invitation that never comes, or comes too late, and with finding creative and kind ways to decline the invite she is positive she does not want. Perhaps the trickiest one, though, is the chance to spend time with someone she’s pretty sure she’s not going to want to see more often, but …

This problem, of course, isn’t confined to dating. We’ve all had nice enough acquaintances who’ve tried to include us more, but we just didn’t see that much in common. We’ve been invited to be on teams or join groups that sort of sounded like fun, but weren’t really. It’s usually flattering to be invited, and for reasons of upbringing, personality or societal expectations, most of us find it hard to say no.

Too many people spend too much of their limited free time doing things they aren’t all that interested in, with people they don’t particularly enjoy. I think it’s time we give ourselves far greater permission to treat our time as the resource it is, and learn to say “I don’t want to join you” in a way that is both kind and firm.

Yes, doing this requires a certain amount of courage.

A few days ago I found myself on the listening end of the conversation I started this post with, and was surprised at the vehemence of my answer. Maybe it was because she had just been telling me how hard she was trying to save money, and how poorly it was going. Something clicked.

“What makes you think your free time is any less precious than your spending money? It’s more precious. Hell yes, you say no if you don’t feel like going!”

Then I started to think about the words we use to describe both of these concepts. We have money. We spend money. We have time. We spend time.

Do we spend anything else? I don’t think so. Even our language acknowledges that time is a resource as precious as our wealth.

A few years ago, two former co-workers I hadn’t seen in years came to my home town and invited me out for the day. They seemed surprised and miffed when I declined. The reaction bothered me, and I remembered writing a post then about saying no to things you don’t want to do. I just found it and it’s called No, I actually don’t want to spend time with you.

I reread it and I stand by it. It’s never necessary to be rude. It is fair to be tired, over-committed, in need of some down time or just plain not interested. It is okay to try something, including an activity or a relationship of any sort, and decide this isn’t a thing you want to keep doing.

We go to great lengths to keep a thief from from spending our money. I think we’d be well-served if we were as vigilant about not letting others take over how we spend our free time.

(For more thoughts on how to use one’s precious time wisely, or poorly, see Live like you are going die?)

I get a lot of ideas for blog posts while I’m doing yoga. Some would say it is because my brain relaxes and stops talking. Others might guess that I’m lucky enough to have uncommonly profound yoga instructors. Normally I’d go with both of the above, but not today. This post comes from my mind’s refusing to agree to do what it is told. 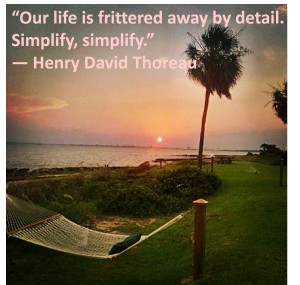 I am instructed to be totally present in the now. This is a common prompt in a yoga class, but problems begin when we are asked to reflect on what keeps us from being so. “I know, I know” the eager student in my head clamors.  She likes getting answers right. “I replay scenes from the past, and I concentrate on tasks and I worry about the future.” But another voice in my head speaks up, and it is less anxious to please.

“Just how effective a human being do you think you would be if you didn’t focus on getting something done?” it asks. “Performing tasks that enhance your chances of survival, and even add to your comfort, is what buys you the freedom to sit around and chant om and do this other shit.”

This particular voice has a bit of a hard edge, but I think it makes a good point. I spend a lot of my day performing tasks that range from spraying stain remover on my laundry to interpreting seismic signals on a computer screen to keeping my car on the road. It is true, this focus on the minutiae of everyday life occupies a lot my thoughts, and as I focus on successfully performing a task, it takes me out of the here and now. Yet, it puts food on my table, keeps me safe, and enables me to wear clean clothes. In short, it makes me a functional human.

But do I want that to be a bulk of my existence? Henry David Thoreau said “Our life is frittered away by detail.”  Am I frittering away too much of mine? I’m ready to hold a robust internal discussion on the subject when my inner mind intervenes, hushing the talk and putting my focus back on my breath.

I’ve been doing yoga now in some form since college, and a few years ago I added qi gong to my daily routine. Yet it was the research for c3 that taught me the most about meditation. I had to learn quite a bit before I could write a scene like this.

Jampa walked up to his favorite rock to meditate. No, it wasn’t his favorite rock. He wasn’t supposed to have a favorite rock. All rocks were fine. If this rock were occupied, he did not want to risk disappointment and worse yet irritation with its occupant. He chose this rock today because it was an effective place for his meditation, and as a young monk in training, Jampa knew that meditation was important.

As he slowed his breathing and concentrated on the Eight-Fold Path, he felt himself slipping into the deep trance for which he was known. Those far older than he marveled at the discipline with which Jampa could let go of the chatter in his mind and the speed with which he could move into the intense contemplation that was the realm of the dedicated Buddhist monk. The truth was, no one had ever taught him the technique. He had been doing it for as long as he could remember.

Jampa had little memory of living with the traveling caravan that had dumped him at the monastery door, but he thanked them every day for the mercy that they had shown him. He was told that he was six or seven years old at the time, and had been purchased by the caravan months earlier to fetch water and do chores.

The men complained to the monks that once they started their journey westward they discovered that the little boy was often useless because he would unexpectedly go into these deep trances. They wished to make a gift of him to the monastery.

The monks had, of course, accepted the gift and made the little boy one of their own. Thus, Jampa had received his name, and had become a devout Buddhist and a citizen of Bhutan before he was eight. For over five years now he had successfully hid the real secret behind his meditative abilities from the men who taught him, and who luckily thought that his going into such a deep trance was a powerful religious thing.

So I channel my character Jampa as my breath slows and softens, as my muscles relax, and as all my internal arguments cease, at least for the next hour. One last bit of analysis flickers from a deep corner of my mind. Perhaps this temporary peace is useful too? Yes, I answer softly. I think that it is.