Today it is my pleasure to welcome author Lucky Stevens and his historical LGBT  novel, The Duplex.

THE DUPLEX is a thrilling tale, set in 1950s L.A., of four gay friends who hatch a daring scheme to live life on their own terms, during a time of systemic governmental persecution.

Los Angeles, 1956. Shangri-La. Palm trees, swimming pools, movie stars. And if you’re gay—persecution. In a society that demands conformity and lockstep conventionality, gay people find out quickly and the hard way, how difficult, dangerous and downright terrifying it is to be different.

So, when the constant fear of arrests, evictions, job loss and ridicule become too much, four gay friends and lovers pull together to hatch an ingenious scheme designed to allow them to live freely, without harassment.

But their secret plan is not without its flaws. Internal struggles and personality conflicts conspire to make their situation harder and more life-altering than any of them could have predicted, leading to valuable and universal lessons about the high cost of blending in—or not.

In The Duplex, Lucky Stevens has written a story that both packs a punch and needs to be told.

I liked so many things about this book, including the way Stevens captures the fifties along with all its many ingrained biases. I enjoyed watching the tale evolve through the eyes of four protagonists, often seeing the same incident through different points of view. I appreciated how Stevens demonstrated the way prejudices against any group seep into the beliefs and self-images of those most adversely infected until they begin to doubt themselves. Sometimes it was painful to read, but, as I said, it’s a story worth telling.

In fact, I liked almost everything about this compelling tale. It moved quickly, and the voices rang true. I suppose one could complain that certain aspects of the two gay men, and two lesbian women, were too stereotypical, and they would have a point. I suppose others might struggle with four alternating first-person points of view, although I liked it.

Some might prefer a neater, more happily-ever-after ending for all, but I thought the ending worked fine. Without giving anything away I’ll just say things get messy but happiness is found, much like in real life.

I recommend this book to anyone, but especially those who like historical novels, are fascinated by the 1950s, or are fans of reading about Los Angeles. The novel may appeal to those in the LGBTQ+ community, but I have a special recommendation and this one comes from the heart.

I HIGHLY (caps intended) recommend this novel to those with close friends or family members who are LGBTQ. It’s an eye-opening look at the world they could be living in. I know it made me aware of the need for us all to be vigilant about preserving the basic human rights this group has had to fight so hard for. This novel is important food for thought for a caring community.

Lucky Stevens lives, works and plays in exotic North America.  He has written three novels.  He was also a finalist in a nationwide screenplay writing contest.  He was inspired to write The Duplex because he wanted to tackle a subject that grappled with universal themes in a creative and exciting way.

Buy The Duplex at Amazon.  The book will be $0.99 and is
Amazon’s #1 New Release in LGBT Historical Fiction!

Lucky Stevens will be awarding $40 Amazon or Barnes and Noble GC to a randomly drawn winner via rafflecopter during the tour.

With the tone of the evening in its proper place, we exited the apartment. 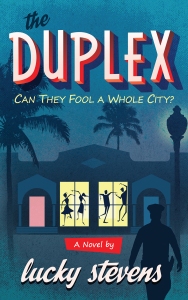 As much as I adore Cliff, I figured I better latch onto Jerry. I don’t know, he just seems a little more like the babe-in-the-woods type. Besides that, it would give me a chance to get to know him. So I stood next to him and slipped my hand around his arm. I gave his bicep a little squeeze. “Ooh, al dente. Just right.” He smiled, and I smiled back. Naturally Cliff and Dot paired up themselves, and us girls held on to each fella’s arm as the men escorted us down the stairs.

As we headed to the car, I was happy to see that my landlady—her name is Mrs. Tambler—was on her patio watering her flowers. She has always been a very nice woman, but she can also be on the nosy side of the street. Because of this fact,

I have had to be careful with Dot, whom Mrs. Tambler has now seen numerous times.

I have told her that Dot is my closest friend, but I am not sure she buys it. For one thing, Dot is quite beautiful and ten years younger than I am. A fact that is a plus for me, but I think a little suspicious looking for Mrs. Tambler. I also only have a one-bedroom apartment, so the idea of Dot spending the night or ever moving in is strictly out.

In any event, with “our men” in tow, I waved to my landlady good and hard in an effort to build up some nice heterosexual brownie points for any possible future mishaps. She looked more than pleased to see Dot and me hanging off the arms of two handsome characters of the masculine variety, shall we say.

The boys, for their part, were just swell. Opening our doors for us, helping us off with our coats, the works. And the fact is, I think we all enjoyed it. It was fun. And nice to be pampered for the night. The boys took care of everything.

It was the perfect mixture too, of chivalry and flirting and teasing which was all made possible by the incontestable fact that no one of the opposite sex was attracted to each other. This is a situation that is very freeing. When there is no chance of romance. No sexual tension. We just played.

Today it is my pleasure to welcome author Barbara Whitaker and her historical romance novel, Kitty’s War.

Seeking adventure, shy Kitty Greenlee joins the Women’s Army Corps. In 1944 England, as secretarial support to the 8th Air Force, she encounters her dream man, a handsome lieutenant who only has eyes for her blonde friend. Uncomfortable around men, Kitty doesn’t think the handsome officer could want someone like her.

Recovering from wounds, Ted Kruger wants to forget about losing his closest friends and have fun before returning to danger as a bomber navigator. When Ted recognizes Kitty as the girl who rescued him two years before, he must choose between dating the sexy blonde or pursuing quiet, serious-minded Kitty even though he knows he’s not nearly good enough for her.

As the war gears up with the D-Day invasion, will Kitty and Ted risk their hearts as well as their lives?

Barbara grew up in a small town in Tennessee where the repeated stories of  local and family history became embedded in her psyche. Fascinating tales of wartime, from her parents and her in-laws, instilled an insatiable curiosity about World War II. After retiring from her sensible career in accounting, she began full time pursuit of her lifelong love of  historical romantic fiction. Enjoying every minute of research, Barbara spends hours reading, watching old, black-and-white movies and listening to big band music.

Although Barbara and her husband have been longtime residents of Florida, they both still think of Tennessee as “home.”

Buy Links and Other Links:

Barbara Whitaker will be awarding a $20 Amazon or B/N gift card to a randomly drawn winner via rafflecopter during the tour.

Once all the WACs were ashore, they marched to a loading area and climbed aboard waiting trucks. Packed like sardines, they had to pile their overstuffed duffle bags on their feet.

Katherine squirmed to get more comfortable and bit her trembling lip.

She nodded, but it was a lie. She fought the panic, pushed it deep inside.

“We’re here. We’ll be settled soon.” Madge tried to reassure her, and Katherine was grateful.

“I know.” She placed her hands on her midsection. “I’ll feel better when my stomach calms down.” Truth was she didn’t like the in-between. She wanted to get there, wherever there was, and get to work. She closed her eyes, leaned her head back against the canvas cover, and willed herself not to cry. After all, she wasn’t alone. Madge was here with her. She’d made it so far. This was the biggest adventure of her life. She wouldn’t fall apart now.

Madge patted her hand, and Katherine realized she had squeezed it into a tight fist. “Kitty. Relax. We’ll get there, in good time.”

“Are you Kitty?” a girl across from them asked.

Katherine’s eyes flew open. She nodded and forced a smile. Madge had dubbed her Kitty when they’d first met. And Katherine had accepted it because she’d wanted so badly for Madge to be her friend.

“I heard you were on the ship. You’re the one who got all the commendations back in Boston, aren’t you?” The girl stuck her hand across the mound of duffle bags. “I’m Dallas.”

Kitty nodded, unsure whether the girl meant her comment as a compliment or a jibe. She leaned forward and politely shook the girl’s hand. “Nice to meet you.”