An eBook reader is wonderful, but it’s not great for flipping back to look at a map or other information. So, if you are reading The Seven Troublesome Sisters, please feel free to copy the info below, paste it into the program of your choice, and print out a real paper copy to refer to as you read. 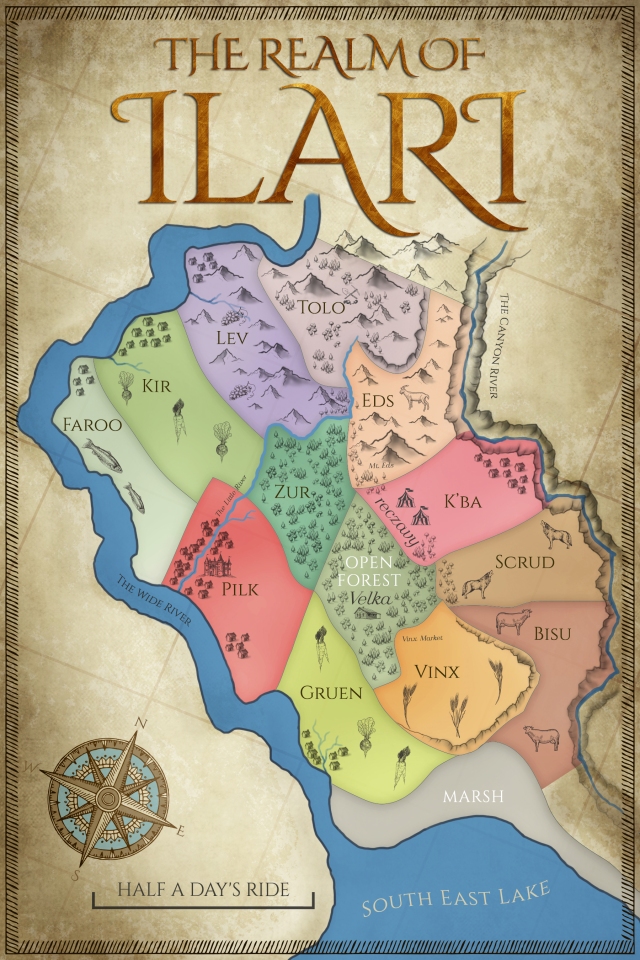 Bisu: These low grasslands at the eastern entrance to Ilari supply coveted beef and cows’ milk to Ilarians.

Eds: These dry hills leading up to the mountains are sparsely populated with independent-minded goat herders.

Gruen: The fertile soil along the river makes for easy farming of fruits and vegetables and makes Gruen home to one of the two more densely populated areas outside of Pilk.

Faroo: This flood-prone nichna in the rivers bend struggles during heavy rains, but is known for fishing and the boating prowess of its residents.

K’ba: This drought-stricken nichna has survived by becoming home to artists, entertainers, and those seeking more freedom of choice. It is also a playground for the richest Ilarians and boasts a densely populated area known for its spectacular food and lodging.

Kir: Ilari’s oldest farming region nestles between Pilk and Lev and grows specialty items for the connoisseurs in both of its neighboring nichnas.

Lev: This nichna is home to the realm’s famed vineyards and supplies Ilarians with wine, their most important beverage. It also leads the fashion scene and sparks trends within the realm.

Pilk: As the informal capital of Ilari, Pilk is home to the Svadlu headquarters, most of the institutes of higher learning, and much of the commerce in the realm. The ruling prince of Pilk coordinates cooperation among the twelve ruling princes. The Pilk Palace outshines any other building in Ilari.

Scrud: Rain-deprived Scrud is the poorest and least populated of the nichnas and the most lacking in natural resources. Most Scrudites survive by taking menial jobs in adjoining Bisu or K’ba.

Tolo: Home to the highest mountains in Ilari, independent Tolovians mine for ore, produce lumber, and serve as a gateway to the even higher mountains to the north.

Vinx: With incredibly flat land sitting above cliffs, the high plains of Vinx provide the wheat, oats, rye, and barley that are the staples of an Ilarian’s diet.

Zur: As the only nichna inside of Ilari’s large central forest, Zur shares the woods with occupants of the Open Forest including the Velka, the reczavy, and scrounger Scrudites.

Ank: A nine-day period. Business is conducted during the first six days while the last three are intended for family life and relaxation.

Heli: The hottest time of the year, but sometimes used as a cussword.

Luski: A feared, possibly imaginary creature who can control others with her voice.

Mozdol: A member of the Svadlu who has been made into an honorary prince due to brave actions defending the realm.

Nichna: One of the twelve principalities of Ilari. Each has its own royal family and is ruled by a prince. All twelve coordinate as regards the Svadlu and other matters pertaining to the common good. There is no king, therefore Ilari is not a kingdom.

Pruska: An extremely rude word referring to a female possessing any number of undesirable qualities.

Rantallion: A man who is being disagreeable, dishonest, or disgusting.

Reczavy: a group of free-spirited people living in the open forest who choose to continue and extend the sexual freedom permitted to tidzys.

Tidzy: A young adult who is searching for a mate and is allowed a great deal of sexual freedom around holidays.

Velka: A group of women who live in the open forest, possibly performing magic. A member of the Velka is called a Velka.

A year in Ilari is divided into eight parts based on the seasons. Each eighth lasts for 45 days and is named for the holiday at its start.

Each eighth is subdivided into five anks. Each ank is nine days long. Businesses and schools are open during the first six days of an ank while the last three, called the ank-break, are intended for family life and relaxation.

Every year astronomers consult the stars to decide which of the holidays will be inside their eighth and which will be treated as extra days. Most years, five or six holidays are ruled to be extra days.

Holidays Marking the Beginning of Each Eighth

Kolada: The winter solstice, the shortest day of the year, and the start of a new year.

Svi: The coldest time of the year, halfway between the winter solstice and the spring equinox.

Noruz: The spring equinox, the start of spring.

Keva: A celebration of those yet to be, held halfway between the spring equinox and the summer solstice. More babies are conceived at Keva than at any other time of the year.

Tirga: The summer solstice, the longest day of the year, the halfway point of a year.

Heli: The hottest time of the year, halfway between the summer solstice and the autumn equinox. Ilarians are not fond of the heat and often use “Heli” as a cussword.

Plono: The autumn equinox, the start of autumn.

Sashi: A celebration of those who have passed, held halfway between the fall equinox and the winter solstice.